Updated a year ago

You're arrived at McCarran International Airport in Las Vegas for a multi-hour layover while flying with a low cost carrier. Before exiting the plane, you feel great about saving your hard earned $200, which is roughly the premium you would have paid to fly with a traditional legacy carrier. Minutes after exiting the aircraft, however, you find yourself overcome by sensory overload, from the loud and glaring slot machines staring you down in the terminal to the hordes of humanity at every gate, waiting to return home to a galaxy far away after a weekend of debauchery.

At this point, the last thing that you'd like to think about is being stuck in an uncomfortable situation. Fortunately, Airport Lounge Development's The Club airport lounges are here to help. The Club at LAS is open and more than happy to provide you with a place to relax in comfort. You take out your iPhone, open up the LoungeBuddy App, and a few taps later, you've purchased instant access to your very own airport oasis. (You can also book access through our web portal.) While you may have paid $39 for lounge access, you're still up $161, with the added benefits of peace of mind, comfortable chairs, a delicious provolone sandwich, a few complimentary cocktails, and a great experience. Clearly, you've discovered the only guaranteed "win" in Las Vegas.

What is The Club?

The Club is a group of independently-run airport lounges with locations in a constantly growing number of airports in the continental United States. These lounges are run by Airport Lounge Development, a subsidiary of the Collinson Group. As you may already know, the Collinson Group is widely known for their lounge membership programs. Along with Manchester Airport Group's Escape Lounges and Swissport's Airspace Lounges, The Club is one of the first and most successful groups of independent, shared, pay-per-use airport lounges in the US.

The locations are often named according to the following format: The Club at (insert IATA code here), though this is not always the case, as with locations in Boston and Pittsburgh.

Until recently, virtually all The Club locations were located in bustling Sun Belt hub airports: Las Vegas (Terminal 1, Terminal 3), San Jose (Gate A15 and Gate A8), Dallas, and the busiest airport in the world: Atlanta. As the network continued to expand, they began to diverge from this trend with additions in the north, including Cincinnati and Seattle (Concourse A, South Satellite). And it's worked out very well thus far. Newer locations are available in Orlando (Terminal A and Terminal B), Boston (Terminal C and Terminal E), Baltimore, and Pittsburgh, as well as Buffalo, Jacksonville, and Charleston. As forward looking trail blazers, Airport Lounge Development looks ahead to continued, steady expansion over the next several years, so be sure to keep your eyes open for new locations.

Fun fact: The Club allows you to bring in outside food, a very uncommon policy for airport lounges.

The proliferation of The Club perfectly illustrates the growth of independent pay per use lounges in the United States. One of the main objectives for Airport Lounge Development, the operator, is to appeal to less-frequent business and leisure travelers who would not normally have frequent flyer elite status or lounge memberships, but who would gladly shell out $39 for a wonderful oasis providing a variety of snacks, a premium drinks, comfortable seating, great service, and fast wi-fi, among many other amenities. This is all in addition to a peaceful environment to relax in, as opposed to the contrast of a noisy gate area.

The hope is that this haven of peace and quiet, with the ambiance of a comfortable hotel, will attract those who might not have considered an airport lounge before. This is a diverse audience who may choose to come around for many reasons, whether it's an unbearably long flight delay, a lengthy layover that nevertheless does not leave enough time to explore the city, a burning desire to get some work done, or just a place to grab a cocktail and watch the planes come and go. 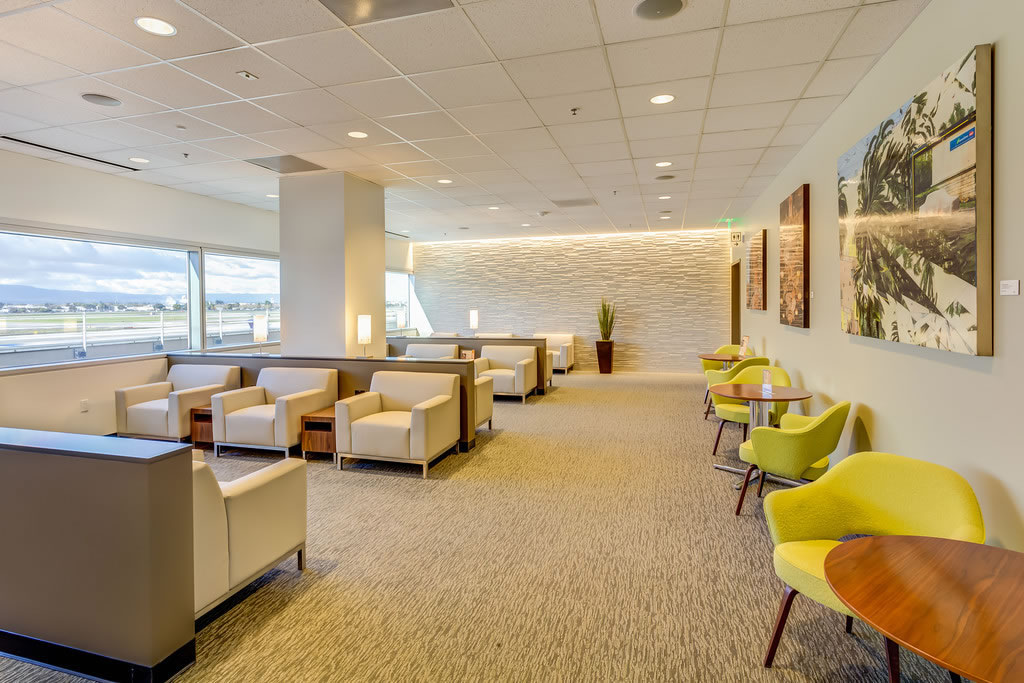 Amenities At The Club Airport Lounges

When you think of "clubs", a familiar image that comes to mind may be a loud, noisy environment with expensive drinks and a crowded, pulsating dance floor. The Club airport lounges are somewhere on the opposite side of the spectrum: a peaceful and tranquil environment, complimentary beer/wine/cocktails, and no dance floors whatsoever. Depending on the location and time of visit, you may also find treats including chips, salsa, sandwiches, soup, and finger foods waiting for you.

Each location has all of the basic necessities of a lounge, including a newspaper and magazine selection, at least one television or more, free wi-fi connection, complimentary snacks, plenty of power outlets, and work stations and/or desks. In addition to that, some locations may have desktop computers for you to work on, printers, or a private conference room. Be sure to check out the LoungeBuddy App to find out more.

At locations that cater to a larger number of long haul international travelers, you'll likely discover more extensive food options, including delicious sandwiches and warm soup. To whet your appetite, here's a sampling of sandwiches you may find at the Las Vegas Terminal 3 location: turkey and provolone on wheat bread, ham and Swiss on rye bread, roast beef and cheddar on a French roll, tuna salad on a French roll, or an exotic egg salad on a kaiser roll. If you're visiting this location in the near future, be sure to try one out and let us know what you think.

Showers, likewise, are available at select locations that cater to a larger number of long haul passengers, such as Las Vegas Terminal 3, Atlanta, Dallas-Fort Worth, Orlando, and San Jose.

One of the great things about the Club is the customized architectural design that takes into account the setting of the airport, another popular contemporary trend. The Club at LAS locations, for example, express the feel of the southwestern desert through the usage of relevant tones and colors: horizontal red cedar siding, quartz counter tops, and a glorious palette of vibrant adobe red, burnt pumpkin, and deep taupe. And how can anyone forget the electric avocado?

By far, the easiest and most convenient way to enter The Club would be purchasing instant access through the LoungeBuddy web portal or LoungeBuddy App. A guaranteed entry will be awaiting you. For the more than reasonable price point of $39 apiece, which is $10-$20 less than a typical lounge pass in an American airport, The Club welcomes you to trade in the hustle and bustle of the airport terminal for an extra large heaping of relaxation and productivity.

Given that this lounge is run by Airport Lounge Development, which, in turn, sits under the umbrella of the Collinson Group, it may not be a big surprise to hear that Priority Pass and Lounge Club card members get either complimentary or reduced-fee access to this lounge, depending on the exact type of membership. What's more likely to catch you off guard is that Diners Club card members also have access to The Club locations.

What Are You Waiting For?

If you're stuck at the airport looking for a peaceful and quiet place to relax and get some work done, look no further. The Club was built especially for passengers like you. Airport Lounge Development has set up a continually growing number of these lounges, scattered all across the US. Whichever one you choose to go to, you'll have the comfort of knowing that the concierges are waiting at the front desk, ready to welcome you with a smile to your home away from home. Enjoy great tarmac views from many of these lounges, energy-laden snacks, comfortable surroundings, a cold beer or other libation, and an excellent productivity-enhancing atmosphere. Simply pull out your iPhone, open up LoungeBuddy, and book your very own airport oasis!

Terminal A, Gate A8

Terminal A, Gate A15

And of course, be sure to check out The Club's website here.

For the consummate road warrior, the world may seem like one massive traffic jam. From crowded airport terminals to clogged highways to long lines at the hotel, there's just no escaping the chaos and stress that...